Wood Street at the side of the door to the Magistrates’ Court. The Tammy Hall. In the eighteenth century Wakefield was a major centre for the wool trade. Raw wool, as well as finished cloth, was sold here. In 1777 a cloth hall was built here for the sale of Tammies, or worsted cloths. By the latter part of the nineteenth century it had fallen into disuse and was acquired by Wakefield Corporation. A part of the hall was demolished to make way for the town hall. The Back Lane end was converted into a police station and what was left at the
farther end became the headquarters of the Wakefield Fire Brigade. Sculptures over the doorways depict its functions. It now houses the magistrates’ courts. 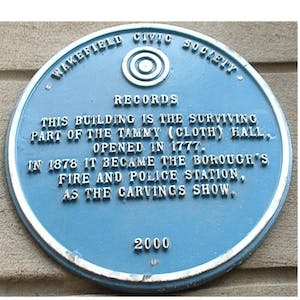