Stanley Hall was the home from 1854 of William Shaw (1804-59) who was a highly successful contractor during the great age of railway building in the 1830s. His career began building ‘Gothic’ churches and continued on the construction of the Macclesfield Canal before progressing to the Leeds and Selby Railway. He earned a considerable reputation in building railway tunnels including those at Chevet, Morley, Woodhead, and Woolley. There is a vast monument to his memory in Wakefield cemetery. 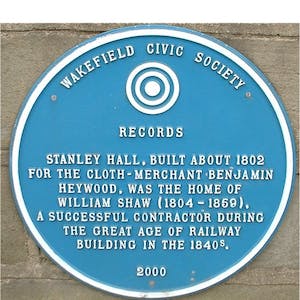