John Wolfenden (1906-1985), came to Wakefield as a boy when his father joined the staff of the West Riding Education Authority. He lived at 196 Alverthorpe Road and attended Queen Elizabeth Grammar School. He then went on to Queen’s College, Oxford, taking a First in Greats (Classics). He had a distinguished career in education taking headships at Uppingham and Shrewsbury, then vice-chancellor of Reading University in 1950. He became chairman of the University Grants Committee and finally the director and principal librarian of the British Museum. He was granted a peerage in 1974.

Wolfenden is perhaps best known for his 1957 Report recommending reforms to the laws on prostitution and homosexuality.

The plaque can be found on the wall of the Balne Lane Community Centre at the top of Alverthorpe Road. 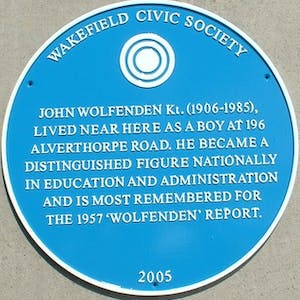