The building in the corner of Crown Court was erected in 1798 as new assembly rooms, the original assembly rooms being a part of the White Hart in Kirkgate. It was variously known as the New Assembly Rooms or the Music Hall. Wakefield’s first newspaper, The Wakefield Star, which was founded in 1803 was published from here.

Between 1845 and 1858 the Wakefield Church Institution used a part of the building for its library, lectures and evening classes. In June 1858 the building was gutted by fire. It was this burnt-out shell that Wakefield’s councillors decided to lease as a Town Hall in 1861, paying the owner, John Bayldon, a substantial sum to rebuild it to the Corporation’s needs.  The Church Institution meanwhile built a splendid gothic Institute in Marygate.

Eventually the Council recognised the need for a purpose-built and impressive Town Hall, This was opened in nearby Wood Street in 1880. 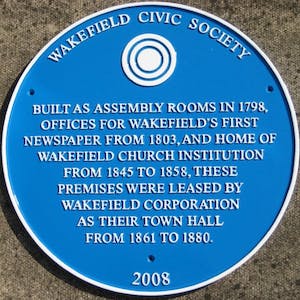