This plaque commemorate the arrest of highwayman John Nevison at Sandal Three Houses in 1685.

Much of the following information has been put together from various internet sources but with some original research by local historian Kate Taylor. One website in particular has proved especially informative - only an extract appears here and we advise anyone interested in learning more to visit www.stand-and-deliver.org.uk for more information.

Nevison's story as we today understand it is a mix of fact and legend - it is not always easy to be certain which is which! Even his name is a source of confusion being reported as John or Willam Nevison, Nevinson, Johnson or even Brace or Bracey.

However, the story we have accepted for the purposes of our plaque is that John Nevison appears to have been born in Wortley, near Barnsley. Reports suggest that he came from a good family - his father could have been a comfortably off wool merchant or a steward at Wortley Hall.

Although Nevison seems to have been prone to stealing and troublemaking at school, he worked as a brewer's clerk in London for several years before absconding to Holland with a debt he had been sent to collect. He then apparently served in an English regiment under the command of the Duke of York in Flanders, distinguishing himself as a soldier, before returning to England where he then lived with his father until his father's death. Now without paternal support, Nevison is thought to have turned to crime, acting as part of a gang of highwaymen along the Great North Road between Huntingdon and York where most of his victims were robbed, possibly basing himself at the Talbot Inn in Newark.

Nevison was something of Robin Hood character, developing fame and notoriety for his expolits. One thing in his favour was that he generally tended not to hurt his victims (but see below).

The legend of Swift Nick: Nevison is renowned for a horse ride between Kent and York, allegedly accomplished on one horse in less than a day. This feat earned him the nickname 'Swift Nick' = a name supposedly conferred on him by King Charles II. The story is as follows (taken from the Stand and Deliver website):

At 4am one summer morning in 1676, Nevison robbed a traveller (possibly a sailor) at Gads Hill in Kent. It seems likely that the traveller recognised Nevison, causing Nevison to make his escape on a horseback, crossing the River Thames by ferry and galloping towards Chelmsford. After resting his horse for half an hour, he rode on to Cambridge and Huntingdon, resting regularly for short periods during the journey. Eventually, he found his way to the Great North Road where he turned north for York.

He arrived in York at sunset after a journey of more than 200 miles, a remarkable achievement for both man and horse. He stabled his weary horse at a York inn, washed and changed his travel-stained clothes, then strolled to a bowling green where he knew the Lord Mayor was playing bowls. He engaged the Lord Mayor in a conversation and then laid a bet on the outcome of the match - and Nevison made sure the Lord Mayor remembered the time the bet was laid - 8pm that evening.

Later, Nevison was arrested for the robbery in Gads Hill and in his defence, produced the Lord Mayor of York as his alibi witness. The Lord Mayor could prove Nevison was in York at 8pm on the day of the robbery and the court refused to believe that a man would have committed that time in Kent and ridden to York by 8pm the same day. He was found not guilty of that crime and emerged as a folk hero, even impressing the king of England and hence acquiring the nickname of Swift Nick.

There are few other accurate records of Nevison's career. His gang of six outlaws met at the Talbot Inn at Newark and robbed travellers along the Great North Road as far north as York and as far south as Huntingdon. He was arrested several times - in 1674, when he escaped from Wakefield goal before charges could be brought, and again in 1676 on charges of robbery and horse-stealing. Nevison was sentenced to transportation to Tangiers, but returned to England (or escaped before the ship disembarked from Tilbury) and once more took to highway robbery. He was arrested yet again in 1681 and escaped with the ingenious rouse of 'playing dead' - getting an accomplice to masquerade as a doctor and pronounce him dead of the plague.

The net was closing in around him however, especially after he killed a man called Fletcher, a constable who died while trying to arrest him. He was targeted by bounty hunters, and after a tip-off from the landlady, was captured while drinking at an Inn at Sandal.

Today, it is believed that the inn he was arrested at was the Three Houses Inn, which stands today at the corner of Barnsley Road and Chevet Lane and thought to be one of the oldest pubs in Yorkshire. Indeed, the chair he was supposed to have been sleeping in at the time of his arrest is now kept at St Helen’s Church, Sandal Magna.

Nevison was taken to York for trial following his arrest and it seems that his execution on this occasion was never in doubt. He was hanged at York Castle in 1685. The body was buried at St. Mary Church, York, in an unmarked grave.

One piece of research unearthed by Kate Taylor suggests that Nevison may have been implicated in the murder of a farmer: an extremely rare chap book dating from 1677 survives in the Minster Library at York. It gives an account of a then very recent murder committed in a village near Wakefield (perhaps Sandal itself). A prosperous farmer was tortured and then killed in the night when a gang of six men and one woman broke into the house. In fact it was the woman who, watched by the farmer's wife who had been tied up and gagged, thrust the knife into the farmer's chest. The chap-book tells us no more of the story. However, when Nevison was tried, one member of his gang - the only woman - gave evidence against him and acknowledged the size and make-up of his gang, though not, of course, admitting to any murder herself. It seems pretty certain that Nevison was involved in this local murder. 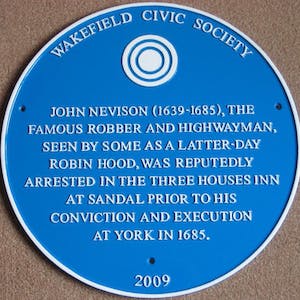