This shop, part of premises built c1850, was a chemist’s from then until the 1970s. Pharmaceutical chemist Thomas Walter Gissing (1829-1870) owned it from 1856 until his death. His eldest son, novelist George Gissing, was born in 1857 in the family home in Thompson’s Yard behind the shop where a museum, run by the Gissing Trust, now celebrates the author’s work and life. Gissing wrote 23 novels, including New Grub Street, and two studies of Dickens, a travel book and numerous short stories.

Although after his father’s death Gissing never lived permanently in Wakefield, his recollections of his home town, its landscape and some of its citizens colour some of his novels and short stories. ‘A Life’s Morning’ in particular has Wakefield as its setting and reflects a period spent at his mother’s home, then in Stoneleigh Terrace, Doncaster Road.

After periods living in the USA and London, George Gissing died in France in 1903 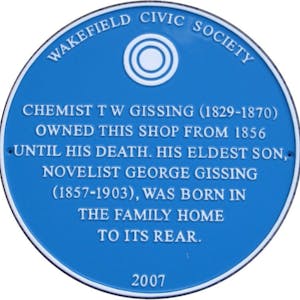