Unveiled in August 2007 by Councillor Clive Hudson, this plaque commemorates the fascinating history of the building that now is home to Wakefield Museum.

Wood Street was opened up in 1809 as a new road to provide a direct route to the new-town development of St John’s Square.

In 1820 subscriptions were raised to build Public Rooms at the town-centre end of the street, with a grand Music Saloon on the upper floor. It seems that money was slow to come in. The building work took many months and the Saloon itself did not open until 22 December 1823. In addition to its concert hall, the Public Rooms housed a subscription library, a newsroom, a savings bank, and, in the basement, a company provided vapour, plunge and shower baths.

In the 1820s and early 1830s, Wakefield’s public dispensary occupied a part of the
basement with residential accommodation for the apothecary and for two house servants in what was described in 1832, when the apothecary died prematurely there, as ‘a poor miserable underground apartment contiguous to a damp beer and porter cellar’.

There were numerous concerts and talks in the Music Saloon. Wakefield’s premier social event, the annual charity ball, which was founded in 1828, was held there. In the 1820s and 1830s, visiting showmen brought panoramas – huge lengths of painted canvas which were drawn from one roller to another, displaying their scenes of battles or distant lands to a
marvelling public.

After the opening of Wakefield’s magnificent Corn Exchange in Westgate in 1838, the Music Saloon lost popularity. Events like balls and bazaars, and even professional operas, took place instead in the much grander Corn Exchange assembly room.

Wakefield’s Mechanics’ Institution, formed in 1841, met during its first year in the Assembly Rooms in Crown Court, holding its evening classes in a number of other rooms in the town. From June 1842, however, it leased the Music Saloon and its Ante-Room with powers to
sub-let.

In 1855 the building was put up for sale. Wakefield had as yet no Town Hall and the Council considered buying it. The Church Institution was also interested in the opportunity. However, it was sold to the, already resident, Mechanics’ Institution. The Music Saloon itself remained available for hire for public events. The building was renamed the Institute of Literature and Science in 1910.

By the 1930s the Mechanics’ Instititute/Institute of Literature and Science, was failing. It was dissolved on 1 October 1935. In 1935 the committee of the Institute offered the building to the local authority and it was formally conveyed to Wakefield Corporation in December 1936. From 1955 until 2011, the building served as Wakefield Museum.

In 2011, it was announced that the museum would move to a new civic building, Wakefield One, opened in the autumn of 2012. Meanwhile the building on Wood Street has been leased to Wakefield College who will use it as a centre for the performing arts. 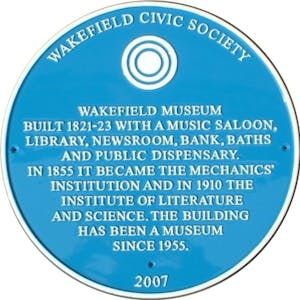