Trevor Hatherton was born at 12, Long Row, New Sharlston on 30th September 1924. His parents were Baden Hector Hatherton a coal hewer and Evelyn Hatherton (nee Burrough). He was educated at Lee Brigg Primary School and Normanton Grammar School. From these relatively humble beginnings, he went on to University in Birmingham and London, before taking a job as a geophysicist in New Zealand.

From there, he explored the Antarctic (on foot), being awarded the Antarctic Medal (as were Scott and Shackleton). He became the Chief Scientist at Scott Base on Antarctica and eventually had a glacier and the laboratories at the base named after him.

Amongst other achievements he was appointed an OBE in 1958, received the Polar Medal for his contribution to Antarctic science, and became President of the Royal Society of New Zealand from 1985-89. 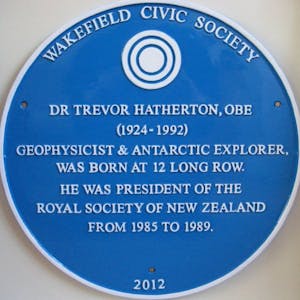