Dr John Radcliffe (1650-1714) is reputed to have lived near here as a boy. His father was the governor of the Wakefield House of Correction. Radcliffe was a pupil at Queen Elizabeth Grammar School going on to University College, Oxford, and then became a fellow of Lincoln College there. He began studying medicine, obtaining a degree in 1675. He moved to London in 1684, building up a substantial practice and in 1686 became physician to Princess Anne of Denmark. Later he was appointed physician to William and Mary. The Radcliffe Library in Oxford was founded by his will. 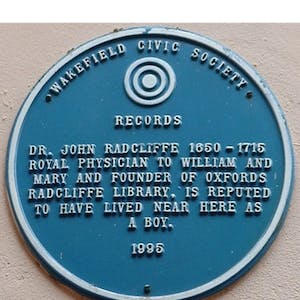