The plaque here marks the site of the great classical Corn Exchange was stood here from 1837 to the 1960s. The Assembly Rooms on the first floor of the handsome building were in frequent use in the Victorian period for concerts, bazaars and all manner of public meetings. In the early twentieth century the Exchange floor became a roller-skating rink and the Assembly Rooms were converted in 1910 into the Grand Electric Cinema.

The current building opened in the 1960s as a branch of the C&A clothing store. 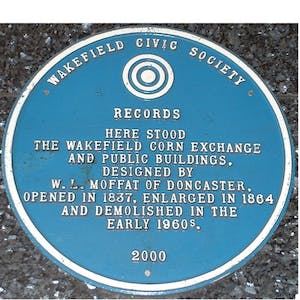